Three-time Wimbledon Champion Boris Becker has been sentenced to two and a half years in prison for four offences under the Insolvency Act 1986 related to his 2017 Bankruptcy. Becker's guilty verdict at Southwark Crown Court is a big scalp for the Insolvency Service who are keen to show their hard-line approach to insolvency offences. However, given the extremely low numbers of bankrupts (or directors) prosecuted as harshly, was Becker a victim of his own fame?

Becker was initially made bankrupt on 21 June 2017 resulting from a circa. €4.6m loan from Arbuthnot Latham, a London based private bank and merchant bank. A judgment debt against him in relation to the loan had been outstanding since October 2015 and he was described by Bankruptcy Registrar Christine Derrett as "a man with his head in the sand". Mark Ford of Smith & Williamson was appointed as Becker's Trustee in Bankruptcy.

Pursuant to §279(1) of the Insolvency Act 1986 ("IA 1986"), a bankrupt will, at the latest, be automatically discharged from bankruptcy at the end of one year. However, the evidence indicated that Becker failed to properly co-operate in his bankruptcy, with Mr Ford believing Becker was being dishonest and hiding assets. Mr Ford's report led the Official Receiver to pursue extended restrictions over Becker.

On 17 October 2019, Becker signed a Bankruptcy Restriction Undertaking ("BRU") with a duration of 12 years, restricting Becker's financial and professional activities, and allowing the Insolvency Service to continue their investigations into Becker's affairs. Given that the duration of a BRU (which lasts between 2 and 15 years) is determined by the severity of the bankrupt's conduct, it was clear that, even at this this stage, the Insolvency Service were extremely concerned by Becker's conduct.

The Insolvency Service's investigations culminated in 24 charges against Becker for breaches of the IA 1986. Becker was acquitted by the Jury on 20 of the 24 offences, including nine counts of failing to provide trophies and medals as part of his bankruptcy estate.

However, Becker was convicted of four offences under Chapter VI, Part IX, IA 1986, these being:

Becker was sentenced by Judge Deborah Taylor on 29 April 2022 to two and a half years in prison (he had faced up to seven years).

A victim of his own fame?

Becker might count himself unlucky as his treatment appears to have been harsher than that meted out to other, less well-known individuals, who have committed similar transgressions. This is demonstrated by the latest set of figures published by the Insolvency Service in relation to enforcement outcomes: 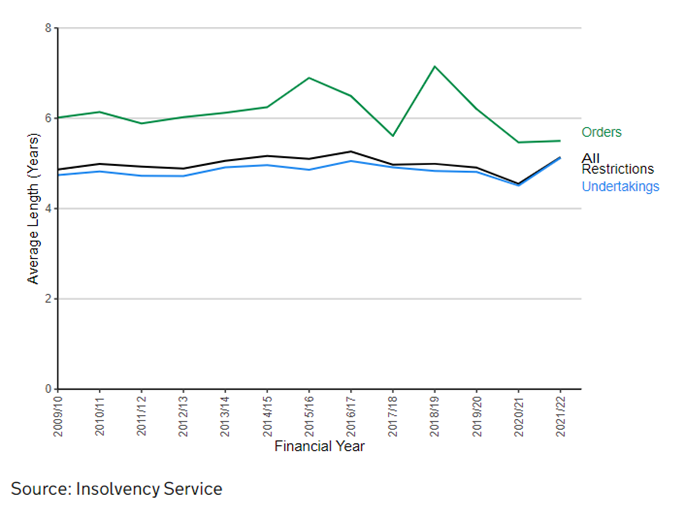 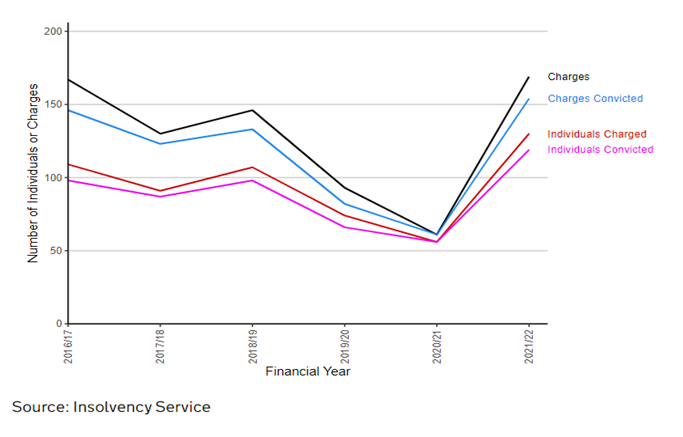 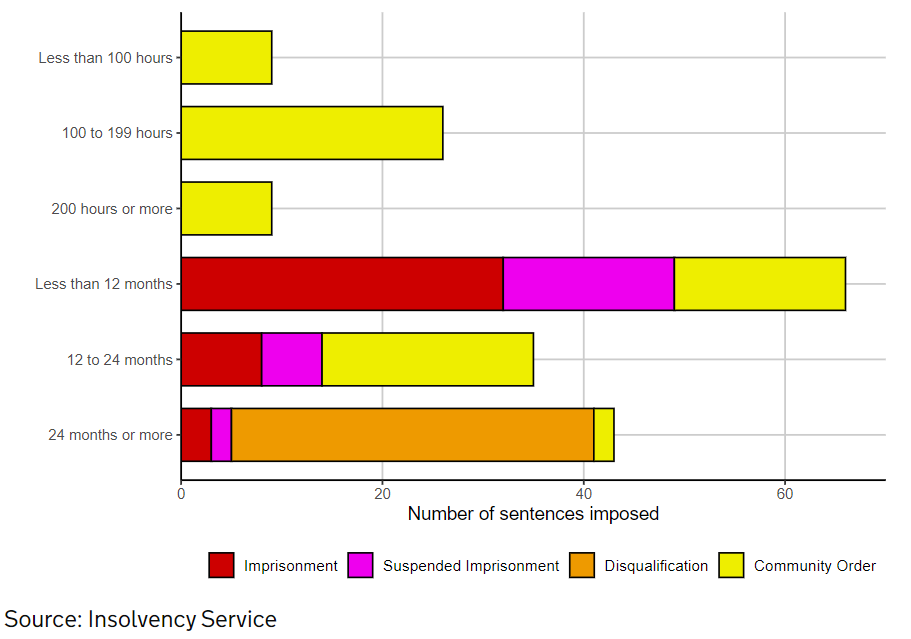 Becker's sentence may seem hard to reconcile with other action taken by the Insolvency Service in the last 12 months, such as in the case of a woman who was handed a two year suspended sentence for stealing a pensioner's life savings (worth £55,000), or the six year director bans for two directors who spent £2.4m before liquidation and failed to keep records showing where the money had gone. Although Becker's behaviour was far from exemplary (compounded by the controversy over his 'diplomatic passport' and, as Judge Deborah Taylor viewed it, showing no remorse for his actions), it can be queried whether it was more egregious than these examples.

The Insolvency Service's dogged pursuit of Becker, when other perpetrators of bankruptcy / corporate insolvency offences are not often chased as vigorously, likely stems from their desire to make an example of him. Chief executive of the Insolvency Service, Dean Beale, arguably hinted at this after Becker's trial, stating: “This conviction serves as a clear warning to those who think they can hide their assets and get away with it. You will be found out and prosecuted.”

This is a deterrent the Insolvency Service sorely needs. Whilst bankruptcies remain significantly down on pre-pandemic levels (4,247 in Q1 2020 compared to 1,679 in Q1 2022), personal insolvencies reached a three year high in Q1 2022. As noted by Andy Nalliah, personal insolvency partner at RSM UK, "IVA registrations for the quarter were recorded at the seasonally adjusted figure of 23,997; the second highest on record and behind only Q2 2020. This would suggest that the first full quarter of lockdown, where many people faced financial uncertainty, the current cost-of-living crisis fuelled by UK inflation hitting a 30-year high is driving debtors to take an active approach as regards their financial positions."

This increase in IVA registrations will almost certainly translate into more bankruptcies (including creditor-led petitions) and this will exert greater pressure on an under resourced Insolvency Service. Add to this the widespread abuse of the Coronavirus Business Interruption Loan Scheme ("CBILS") which is being reported across the industry, and which includes dishonest and misfeasant directors using the monies to buy personal items, such as luxury watches. It is estimated that there is potentially £26bn billion in losses connected to CBILS fraud.

Whilst Becker's conviction is a success for the Insolvency Service, it is a drop in the ocean when compared to the mammoth task they face in the coming months and years recovering from the wide-ranging effects of the pandemic.

The Insolvency Service's dogged pursuit of Becker, when other perpetrators of bankruptcy / corporate insolvency offences are not often chased as vigorously, likely stems from their desire to make an example of him

Boris Becker has been jailed for two and a half years for hiding £2.5m worth of assets and loans to avoid paying debts.

He was found guilty of four charges by a jury under the Insolvency Act.

"Boris Becker’s sentence clearly demonstrates that concealing assets in bankruptcy is a serious offence for which we will prosecute and bring offenders to justice," said Chief Executive of the Insolvency Service, Dean Beale. https://t.co/BP47VfzG8Z pic.twitter.com/nMtxxRdNZf

Boris Becker failed to declare significant assets in his bankruptcy. His conviction sends out the strong message that as a bankrupt if you hide your assets then we will seek the strongest possible enforcement measures https://t.co/HxeABcs68s

US investment in English football; a road to glory?

Taxing Times for the Football Industry

Time for change: The Law Commission's review of the Arbitration Act 1996